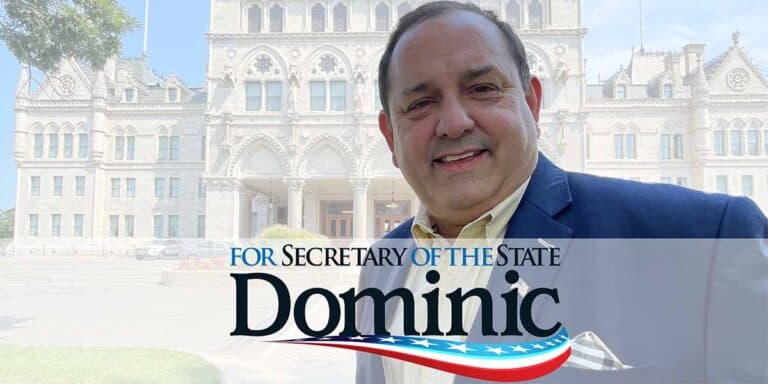 BRANFORD, Conn.—Following the announcement of his campaign for Secretary of the State on Aug. 18, Dominic Rapini’s campaign exceeded their quarterly goal of raising 25% of the projected Citizens Election Program (CEP) threshold to qualify for the $800,000 grant from the State of Connecticut.

Dominic is building measurable momentum, demonstrating that Connecticut is ready for a leader who will put politics aside to make sure our elections are trustworthy, safe, and secure. Over the course of a little over a month, Dominic and his team have been building support and talking to citizens and election officials across our state. Below is an update on where we are and where we're headed.

FUNDRAISING: In less than 5 weeks, we have exceeded our goal by raising $21,000—just over a quarter of the estimated $80,000 needed to acquire the $800,000 grant from the state of Connecticut. Realizing that our 169 RTC’s are in the midst of their town and municipal races, Dominic and his team took special care to cast a wide net and target donors outside of RTCs.

With three fundraising events hosted in the first quarter, as well as countless personal connections made, we have seen enormous fundraising success because of Dominic’s unmatched experience and his core principles of service.

ON THE ROAD: Dominic’s boundless energy has taken him to every corner of the state, from Brookfield to Bozrah, and everywhere in between. At every event, Dominic connects with his audience and isn’t afraid to take tough questions. From the beginning, Dominic’s priority has been to talk with voters, share the expertise from his past work with the CTGOP and on election integrity issues. Every meeting makes clear how well-prepared Dominic is to cultivate solutions for building fair and secure elections while also improving services to businesses that require services from the Secretary of State’s office.

CONNECTING: As a technology executive whose experience spans decades coupled with his expertise on elections, people are connecting with Dominic. His smooth and fact-based handling of questions underscores his qualifications to be an effective leader as Secretary of the State. What we’ve found on the campaign trail is that people are ready for a non-partisan and pragmatic leader with new solutions. Dominic’s calm and common-sense approach; and not political sound-bites is clearly resonating.

IN THE MEDIA: As a champion for access and fairness in our elections, Dominic’s performance in every radio and print interview has been exciting. Since launching his campaign Dominic has had radio interviews with Vinnie Penn, Lee Elci, and Todd Feinberg. He has also spoken with the CT Examiner and has written two Op-Eds. One Op-Ed focusing on the extra burdens imposed on our state election officials, and the other on the risks of unsolicited mass mailing ballot applications in Waterbury.

Bottom Line: In just 42 days after Dominic announced his candidacy for Secretary of the State, the momentum is clear and the energy is building.

Together with our growing ranks of supporters, we are building a movement day by day, speech by speech, connection by connection and we are ready to go the distance.

We look forward to meeting you in the weeks and months ahead.

PDF of this press release