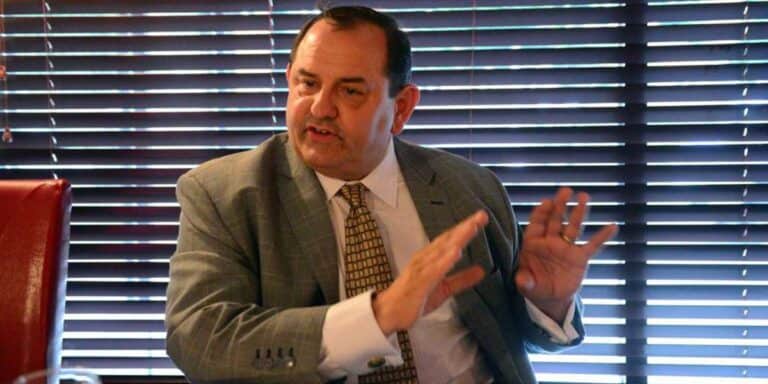 Lee Elci:  Now what made you decide to run for Secretary of State?

Dominic Rapini:  Well, I'll tell you why, because we have, I just saw in Harford after I testified four different times on election laws that there is a bevy of laws coming down the pipe that if we don't have somebody there who can execute these laws in a way that is practical and that is safe and that is secure for all voters in Connecticut, we're going to have a big problem. I've seen for three years all the problems that we have in our election system. And believe me, we have a lot of good things. We have our election professionals, our Registrars and Town Clerks - they're amazing. But they're given jobs by our lawmakers, our lawmakers are writing a check that these guys can't cash and they don't have the resources, they don't have the leadership, they don't have the guidance they need to do their job.

Dominic Rapini:  So day one, I want to do some things that are going to restore the trust in our election. We saw our cities like Hartford and New Haven and just in 2020, when they could have voted in 40 different places in the cities, they had absentee ballots, they had drop boxes, less than 48 percent of these registered voters actually went out and voted. And trust is a problem. So part of the problems in Connecticut is when there is an example of fraud or or just sloppy work done on election day, it doesn't get investigated, nothing happens.  And so the poster child for problems, election problems in Connecticut is Bridgeport.  We just recently had another political official. He got arrested for voter fraud. He was forging ballots, identity theft, the whole nine yards. This is like the twelfth one in the last 15 years. It just happens over and over again. So on day one, I'm going to initiate what should have been done a decade ago, a forensic audit of the voting process in Bridgeport. We're going to focus on absentee ballots because most of the problem is happening out on the street, at Harborview Terrace, at Clifton Apartments, where people are being bullied by ballot harvesters and they're being coerced for their votes and their ballots. And I don't know how big it is because nobody's researching it. No one's done anything about it.  So day one, that's what we're going to do. We're going to fix Bridgeport. And during this campaign we're going to make sure everybody knows that this is the city, that if we fix this, everybody's going to feel better about our election.

Lee Elci:  So we saw the whole system upside down in 2020. You had all these absentee ballots, you had this big push to have actually more of that, not less, more opportunity to vote, more time to vote. Where do you see all this? Let's say even in 2022, but where do you see us in 2030 when it comes to voting?

Dominic Rapini:  Well, it's right in front of us right now, Lee, because in 2022, the constitutional amendment will be on the ballot and Connecticut voters will decide if they want early voting. And I'm not that philosophically opposed to early voting, I think it should happen in two or three days, not 30 days. And because our 169 towns,  every town is very unique. We don't have county government in the state, so we can't handle much more, so we have to listen to these election officials.  So maybe we can do two, three days.  In 2024, I think the opposition party is going to try to put no excuse absentee ballot on the Constitution amendment. It was defeated. We testified against it because we don't think we have the infrastructure to handle it. So that's been pushed off. In a few years, it'll be up to the Connecticut voters and they have to decide, hey, what's broken with our election system is it because we can't vote early now or we have to mail on our vote?  I don't think those things are going to make us more engaged citizens. In fact, around the country some of the best turnout were in states where they didn't have early voting, where they didn't have no excuse absentee ballot. It doesn't make it better. So whatever we do, we've got to do it right. And that will be my job.

OLDER CT Examiner: When Will Hartford Lawmakers Listen to Election Officials? NEWER Connecticut Examiner: Dominic Rapini Takes up Voter Trust as an Issue in his Bid for Secretary of the State