The results are the same. Time to Investigate and get the Truth. 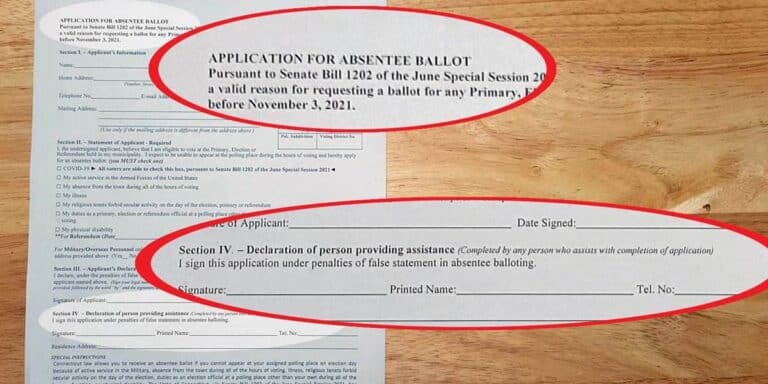 Absentee ballot voting in Connecticut is a privilege enshrined in the Connecticut Constitution. Laws carefully regulating the use of absentee ballots are written into our election law and have been largely followed in our state for years.

However, more facts are now coming to light that increasingly suggest that the legal privilege of absentee balloting may have been intentionally abused. And now high-ranking State election officials are saying “Oops, sorry”?

Recently, multiple town campaigns, statewide, failed to comply with some or all of these requirements but the towns of Newington and Guilford serve as prime examples. In Newington and Guilford, these election laws were violated by the Democratic Town Committees including assisting with ballot applications without being designated caregivers and without in person signatures attesting assistance. Each Democratic Town Committee also failed to serialize the applications per state law.

Newington’s election officials, in a competent and unified manner have protested these violations of state law with a bi-partisan condemnation directed to the SEEC. They have sequestered the ineligible ballot applications and have demanded the SEEC notify the voters and give them time to cure the mistakes while there is ample time. LINK.

BRAVO for our towns’ hard working election officials, they know their job, they know the state election laws, and by their action, they have spotlighted the questionable conduct of Ted Bromley and lack of non-partisan oversight by Denise Merrill.

The record is clear that the Secretary of the State’s office had warnings about the potential abuse of absentee ballots from the special elections in January 2020 such as Stamford where 1,000 Absentee Ballot Requests had the exact same violations. In the Stamford case, the SEEC complaint (#2021-041) which I helped file with Stamford RTC Chair, Fritz Blau was found valid and wrongdoing was confirmed. The SEEC ruled that these ballot applications were improperly distributed by the Democratic Town Committee. This violation of the laws governing campaigns soliciting absentee ballots should have been a red flag for Ted Bromley, a teachable moment for all campaigns. But it was ignored.

This begs the obvious question, is such clear and intentional action, simply excused as “ignorance of the law”? Did Ted Bromley passively encourage these actions by using vague language? Was the after-the-fact apology, once the illegal activities were caught, a poor attempt at covering his tracks?

It should be clear to all voters who hold election integrity as a fundamental principle of our democracy that Ted Bromley and the office of the Secretary of the State may have willfully gave the wrong guidance to Democratic Town Committees. These documented and undisputed actions reek of a coordinated partisan tactic to overwhelm the election day system and tip the scales for the candidates they support.

This is why I am calling for the SEEC to immediately commence an investigation into Ted Bromley’s actions and the Secretary of State’s office for partisan complicity or negligence. How did a seasoned veteran of Connecticut elections get it so wrong?

Every voter must demand nothing less than 100% non-partisan fairness and integrity and if there is a prime example of this principle being violated, this is it.

This is also precisely why our State needs a non-partisan Secretary of State with a business-like focus on cleaning up these kinds of activities that undermine voter trust. Actions like Ted Bromley’s are why Connecticut Elections are mistrusted by the electorate. My mission is to restore this trust and fight for every voters’ electoral rights in Connecticut.

Candidate, Secretary of the State

Sec. 9-135. Absentee voting eligibility; expansion for 2020 state election. Misrepresentation prohibited. (a) Any elector eligible to vote at a primary or an election and any person eligible to vote at a referendum may vote by absentee ballot if such elector or person is unable to appear at such elector's or person's polling place during the hours of voting for any of the following reasons:

Such elector's or person's active service with the armed forces of the United States;

such elector's or person's illness;

such elector's or person's physical disability;

the tenets of such elector's or person's religion forbid secular activity on the day of the primary, election or referendum;

the required performance of such elector's or person's duties as a primary, election or referendum official, including as a town clerk or registrar of voters or as staff of the clerk or registrar, at a polling place other than such elector's or person's own during all of the hours of voting at such primary, election or referendum; or

for the state election in 2020, the sickness of COVID-19. As used in this section, “COVID-19” means the respiratory disease designated by the World Health Organization on February 11, 2020, as coronavirus 2019, and any related mutation thereof recognized by said organization as a communicable respiratory disease.