Widespread violations of Absentee Ballot laws and blatant partisan favoritism shown by the Secretary of the State's office is detailed in this letter to the State Elections Enforcement Commission by Dominic Rapini. 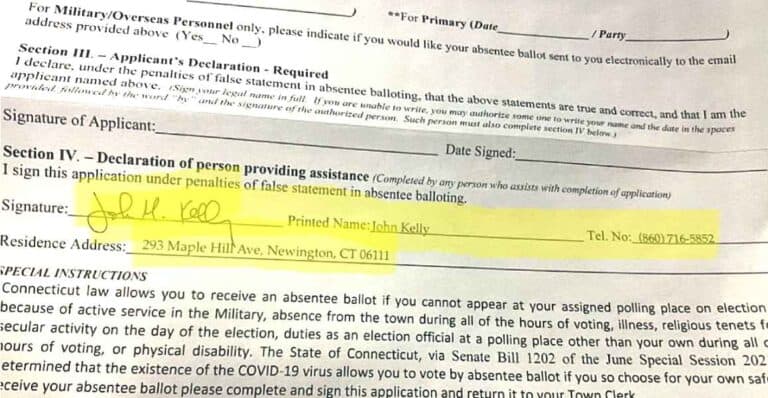 There are disconcerting factors that indicate Connecticut’s Director of Elections, Ted Bromley may have had advanced knowledge of a plan by Democrats to abuse our absentee ballot voting system and that the wholesale abuse of the system for requesting absentee ballots could have been avoided.

The record is clear that the Secretary of the State’s office had warnings about the potential abuse of absentee ballots from the special elections in January 2020 in Stamford where 1,000 Absentee Ballot Requests had the exact same violations. In the Stamford case, the SEEC complaint (#2021-041) which I helped file with Stamford RTC Chair, Fritz Blau was found valid and wrongdoing was confirmed. The SEEC ruled that these ballot applications were improperly distributed by the Democratic Town Committee. This violation of the laws governing campaigns soliciting absentee ballots should have been a red flag for Ted Bromley, a teachable moment for all campaigns. The final decision by the SEEC resulted in no fines or disciplinary action and was therefore a missed opportunity to prevent the chaos we just witnessed in the 2021 municipal cycle.

Recently, multiple town campaigns, statewide, failed to comply with some or all of the requirements of our absentee ballot voting system, but the towns of Newington and Guilford serve as prime examples. In Newington and Guilford, these election laws were violated by the Democratic Town Committees including assisting with ballot applications without being designated caregivers and without in person signatures attesting assistance. I estimate that 30,000 to 40,000 Democratic voters were issued illegal absentee ballot applications and many of them signed an illegal document.

In a written letter, Mr. Bromley recently took responsibility for a ‘miscommunication’ and ‘imprecise communication’ to Democratic Town Committees appearing to encourage and abet potential abuses of absentee ballot voting as seen in Newington and Guilford. This is, in my opinion, a weak attempt to veil a deliberate attempt to support the illegal process proposed by local Democratic Town Committees and even political consultants such as Blue Edge Strategies who figured prominently in the Newington issue.

This begs the obvious question, is such clear and intentional action, simply excused as “ignorance of the law” by an 18-year election veteran? Did Ted Bromley passively encourage these actions by using vague language?

While I am thankful that the SEEC has voted to investigate the alleged Guilford infractions, I urge that the investigation is expanded to include Ted Bromley’s questionable conduct of providing incorrect guidance to Democratic Town Committees that appear to be part of a coordinated partisan tactic to overwhelm the election day system and tip the scales for democratic candidates.

Candidate - Secretary of the State

OLDER Fighting for Democracy is a Contact Sport! NEWER A Thanksgiving Message from Dominic Rapini
Clear Clear All