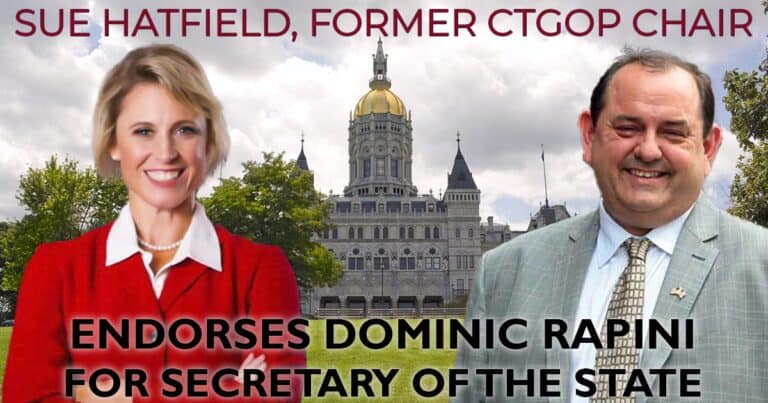 Hey everybody, I'm Sue Hatfield, former chair of the Connecticut Republican Party. Republicans, let's huddle up. On August 9, Connecticut is going to have a Republican primary. I needed to do a few things first circle that day on your calendar, make a plan to vote, and then vote for my friend, Dominic Rapini, who is running for Secretary of the State. And here's why. Dominic will be a true friend to Eastern Connecticut. He will be our voice for the people east of the river. Dominic - we've all seen his boundless energy, his commitment, and his enthusiasm for running for Secretary of the State. Quite frankly and simply, Dominic, you are an amazing person. He's a father. He's a grandfather. He's an executive. He's a solid Republican. He's a former collegiate football player. And Dominic, you don't brag about this, but I absolutely love this quality about you. Dominic has served as a mentor to over 1,000 young men over the course of 32 years of coaching youth football in New Haven County. Dominic, I am proud to be your friend, to support you, and be your teammate. - Sue Hatfield

Watch the FULL 4 minute video on Facebook - includes other endorsements.